Huawei is announcing its flagship P20 (or P11, the naming isn't 100% known at the moment) on March 27 at a special event in Paris. While the P20 and P20 Plus / Pro are expected to come with three rear cameras, the entry-level model in the line, the P20 Lite, will stick with two. We've seen this phone get certified by the FCC yesterday, and a few hours ago some 360-degree renders of it were outed based on CAD schematics.

To add to that barrage of P20 Lite leaks, we now have some live images to show you. They show the iPhone X-inspired vertical arrangement for the dual rear cameras and their hump, as well as the notch at the top of the screen, which is smaller than in Apple's most expensive phone. 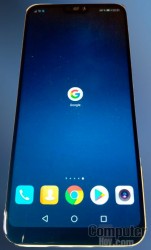 The P20 Lite will have a screen approximately 5.8" in size with 18:9 aspect ratio, according to a person who has seen it (and who is the source of the pictures). That contradicts the FCC's measurements which mentioned a 2,280x1,080 resolution and 6.1" size, with 19:9 aspect ratio. It may just be that the aforementioned person assumed he or she was looking at an 18:9 screen, since those are very popular with Chinese smartphone makers. To complicate things even further, those 3D renders from earlier today talked about a 5.7" display.

Moving on, its dimensions will be approximately 148 x 71 x 7.2 mm. Its construction should be of the metal and glass sandwich variety, with a pale pink like color depicted here and a black version expected too. There's a USB Type-C port on the bottom, where a 3.5mm headset jack also lives. Unfortunately that may not be a feature of the higher-end P20 models.

The Huawei P20 Lite should have a 2,900 mAh battery as per the FCC, and as you can see its fingerprint sensor is on the back. It's likely to run Android Oreo from day one, underneath Huawei's EMUI 8.0. At the helm we'll either see the flagship Kirin 970 SoC, or an updated version of the Kirin 659.

Source (in Spanish) | Via