Lets face it, pirating apps for their services is still a reality and likely will be for a while. In fact, pirating an app is not as difficult as youd think. Its especially easy on Android  find a modified version of the official app and log in using your free account, the modification would trick the system into thinking the account is a premium one.

Spotify has known it had some pirating offenders for a while now. But it chose to leave them for a while until recently when users have been receiving emails saying that there has been abnormal activity on the app they were using and reassured them that their accounts were safe. 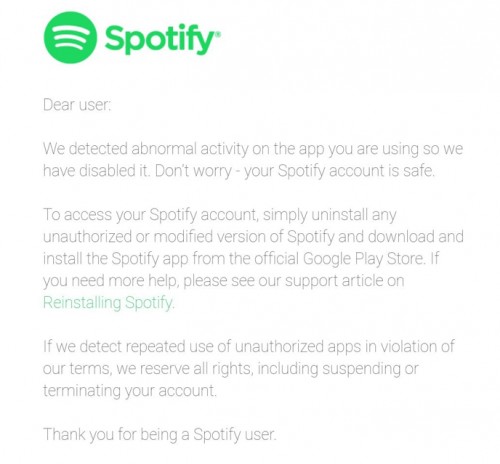 The email is more of a slap on the wrist if anything since Spotify has yet to suspend or terminate any accounts. In order to regain Spotify access, the email asks users to uninstall any sideloaded version of the app and to download the official version from the Play Store.

In addition, if Spotify detect[s] repeated use of unauthorized apps in violation of its terms and conditions, Spotify might resort to suspending or terminating your account.

According to Torrent Freak, the users who have reported about the email say their apps have stopped working while other say their modified apps still work. Those who were heavily invested in the "extended free trial" of the premium service they were getting will have to fork over the monthly fee like the rest of us.