صفحه اصلی
خبرهای داغ
Weekly poll results: the ideal weight for a phone is between 140g and 170g

Weekly poll results: the ideal weight for a phone is between 140g and 170g

For most people, the ideal weight of a phone is between 140g and 170g. We were surprised to see how many people commented on our poll that lighter is better. Theres a sort of stigma around light phones  the heavier handsets just feel more durable.

Of course, that is mostly an illusion. A phone made of polycarbonate will like outlive a metal phone while being lighter. But plastic doesnt sell phones, metal and glass do  just look at a list of the best-selling phones.

Many people did say that weight is a secondary concern. And its true that battery and additional hardware add to the weight, but there isnt a strict correlation between weight and battery capacity, e.g. 202g iPhone ۸ Plus has a 2,680mAh battery. Or between weight and durability  the Moto Z2 Force with its shatterproof screen weighs just 143g, for example.

Plus, keep in mind that the cases most people put on their slippery metal-and-glass phones adds to the weight. Why did removable back covers fall out of fashion again? We still think they were a better solution than cases. Oh, well. 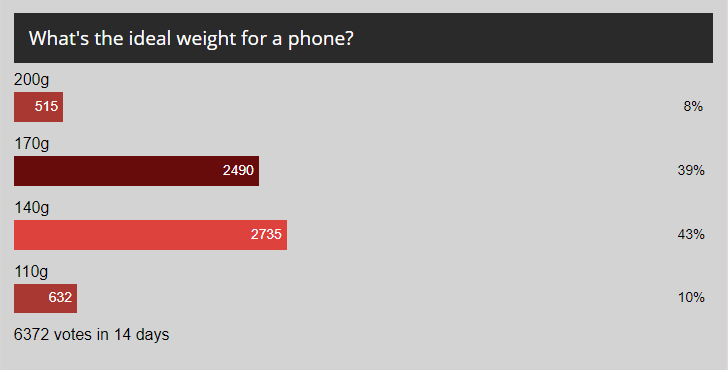 our poll, weight of a phone
۱۳۹۶-۱۲-۱۲